Palm Beach County has around 44 billionaires. The super-rich are flocking there for business opportunities, convenient transport links, and a chance to live in ‘paradise.’ 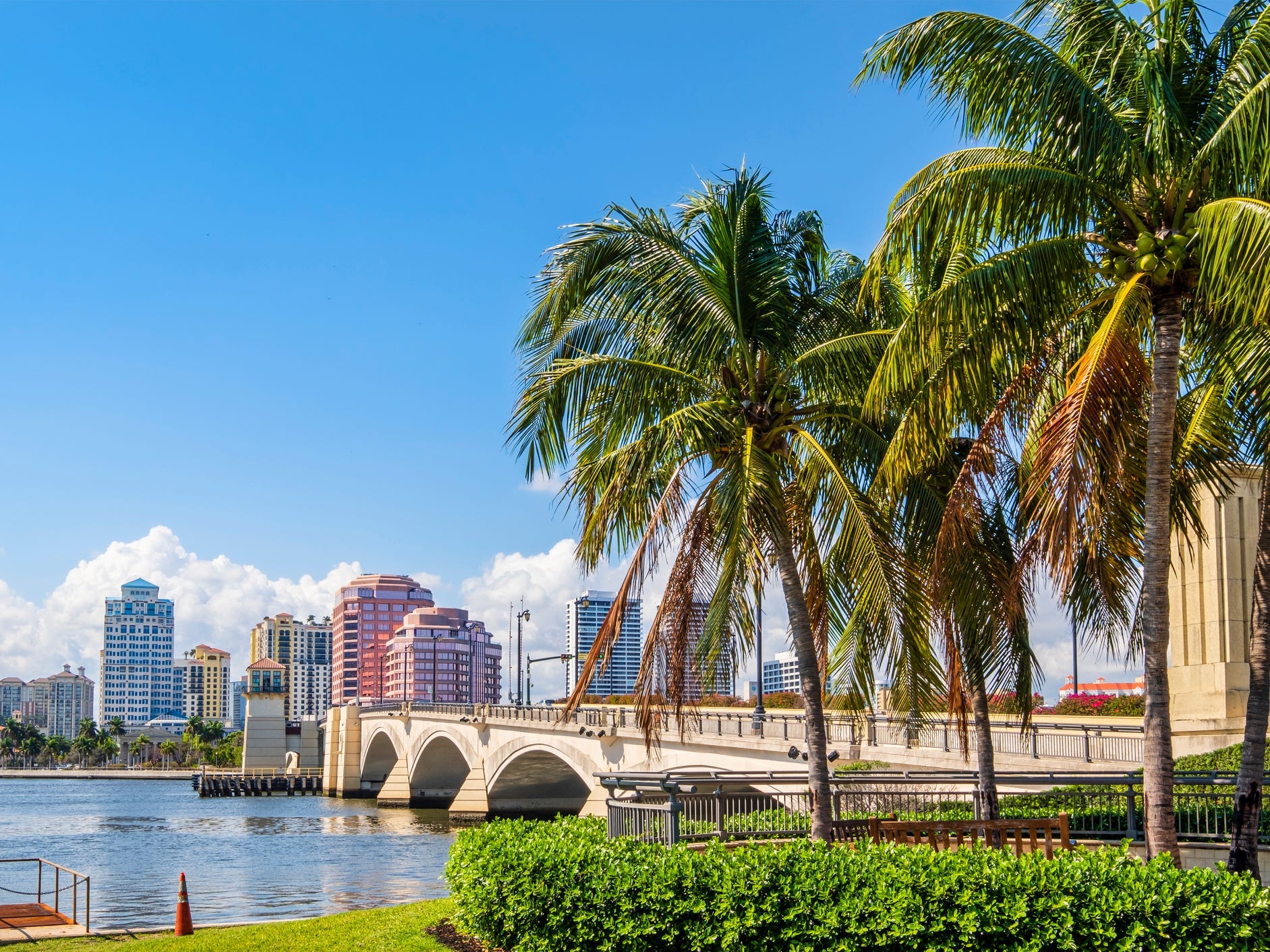 West Palm Beach is attractive for both workers and their families.

Palm Beach County's grew twice as fast as the US average over the past decade.
This has accelerated during the pandemic as remote workers sought a sunnier climate during lockdown.
Three locals explained why both people and businesses are flocking to the county.
See more stories on Insider's business page.

Florida has been one of the few states to see real economic progress during the pandemic.

Both businesses and companies have flocked to the US' third-largest state over the past year because of its pro-business environment, including a lack of personal-income tax, alongside its sunny climate that made it an alluring place to spend lockdown.

And Palm Beach County, located just north of Miami, has stood out. Elliott Management is planning on moving its headquarters there, Citadel Securities based its trading-floor's COVID-19 bubble at a hotel there, and hundreds of families have relocated to the county.

Read more: IBM is hunting for a smaller NYC office now that 80% of its employees won't come in every day. It's a sign of the times.

Insider spoke to parties involved in the local economy, including the mayors of Boca Raton, West Palm Beach, and Palm Beach town, to understand what's driving people to move to the area.

'We punch above our weight in terms of business strength'

Palm Beach County has been working to drive a migration of businesses for around 10 years, Kelly Smallridge, CEO of the county's Business Development Board (BDB), told Insider.

The county is popular among boaters.

The county realized that executives were buying second houses or coming for vacations in Florida, but owned a large business in another state. So the BDB approached them about bringing their business to Florida, Smallridge said.

"That initiative has turned out to be the most lucrative economic development initiative in the last 40 years," Smallridge said.

The BDB isn't the only group actively recruiting businesses to move to the county. West Palm Beach mayor Keith James told Insider that the city had been reaching out to financial-services companies for years – not just in New York but in other Northeast states including Vermont and Connecticut, alongside some companies as far afield as California.

He said the city had been fielding "plenty" of inbound calls, but that it had also launched targeted advertising in the New York, Chicago, and San Francisco markets, including promoting its technology business hub. 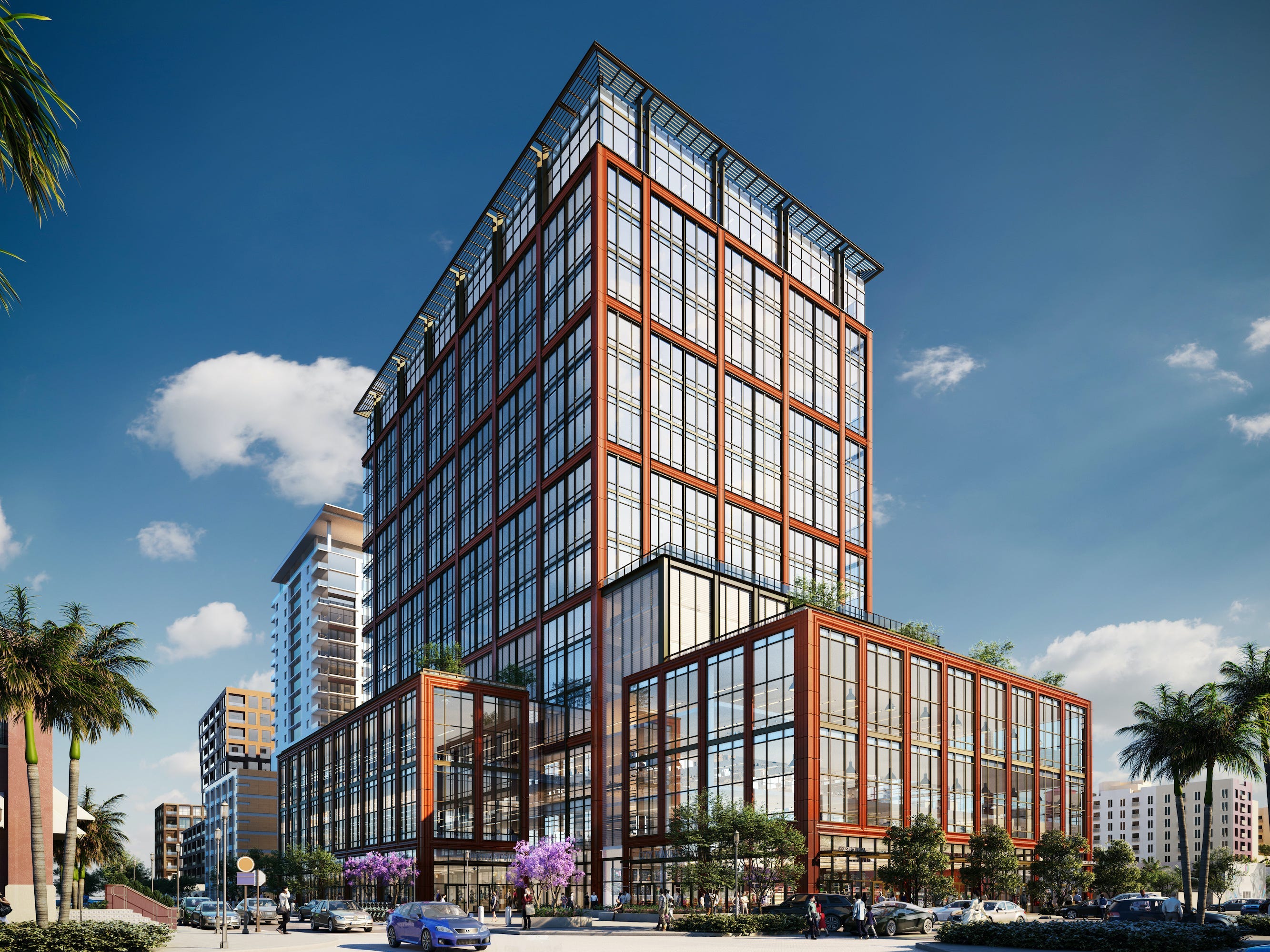 Hedge fund Elliott Management is in final-stage talks to move its headquarters from Manhattan to West Palm Beach, while Maryland-based mortgage company New Day USA is leasing 50,000 square feet of office space as a second headquarters in the city.

Almost 2,500 financial-service firms have offices in the county, employing 37,000 people in total, according to the BDB.

But other industries are growing, too. West Palm Beach is targeting the marine and medical industries for future growth, while Singer said that Bacon Raton has been a tech hub for decades, noting that IBM developed the first personal computer there in 1981.

Palm Beach County's 47 miles of coastline mean that its marine industry is booming.

Singer said Boca Raton had the number of corporate headquarters you'd expect from a city of four or five times its size. These include the headquarters of The Office Depot, ADT, and Bluegreen Vacations.

"We punch above our weight in terms of business strength," Singer said.

The county also has a 350,000 square foot convention center with 19 meeting rooms for businesses to hold events, conferences, and trade shows. 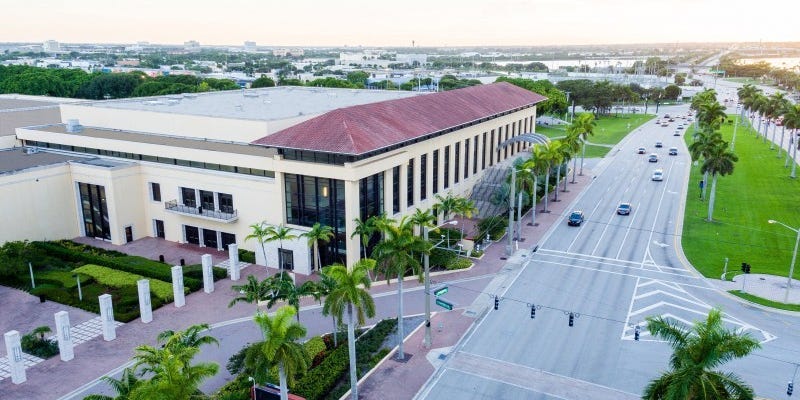 The county even has its own convention center.

Florida doesn't have a personal-income tax but it has a variety of other business benefits, too, Troy McLellan, CEO of Boca Raton's Chamber of Commerce, said.

He said Boca Raton has a "rich entrepreneurial environment" and "an ecosystem that supports business and entrepreneurs," in part thanks to actions of Florida Gov. Ron DeSantis. He also points to the collaboration between groups such as the Palm Beach's BDB, the regional Chamber, and Enterprise Florida.

Boca Raton alone has three college campus that create a pipeline of intellectual capital for businesses relocating to the area, McLellan said. 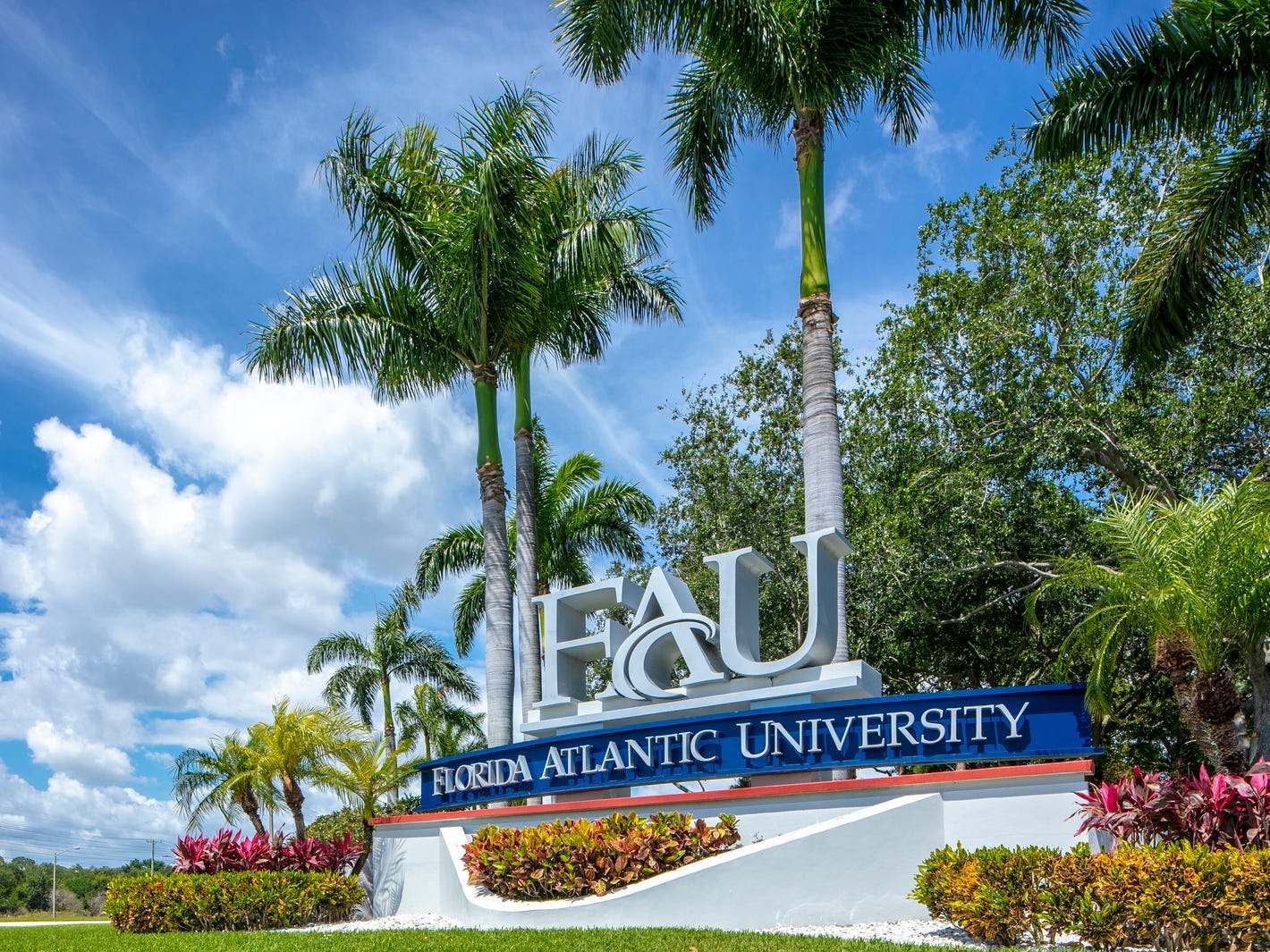 Florida Atlantic University's main campus is based in Boca Raton.

There are a lot of transport developments either in place or in the pipeline for Palm Beach County, too.

The county has an international airport, which more than six million passengers pass through each year. Even the most northern part of the county, Jupiter, is located just 90 minutes' drive from Miami and Fort Lauderdale airports for a wider range of long-haul flights.

Boca Raton also has its own general aviation airport, while West Palm Beach is planning to launch a study into the feasibility of direct flights from the city to the Caribbean to benefit its marine sector.

And traveling from West Palm Beach to the rest of Florida is getting easier after it was connected to Miami through Brightline, a rail system with investments from Richard Branson's Virgin, John Boyd of the Boyd Company said. The route will be expanded to include Orlando and its airport as well as Tampa, too. 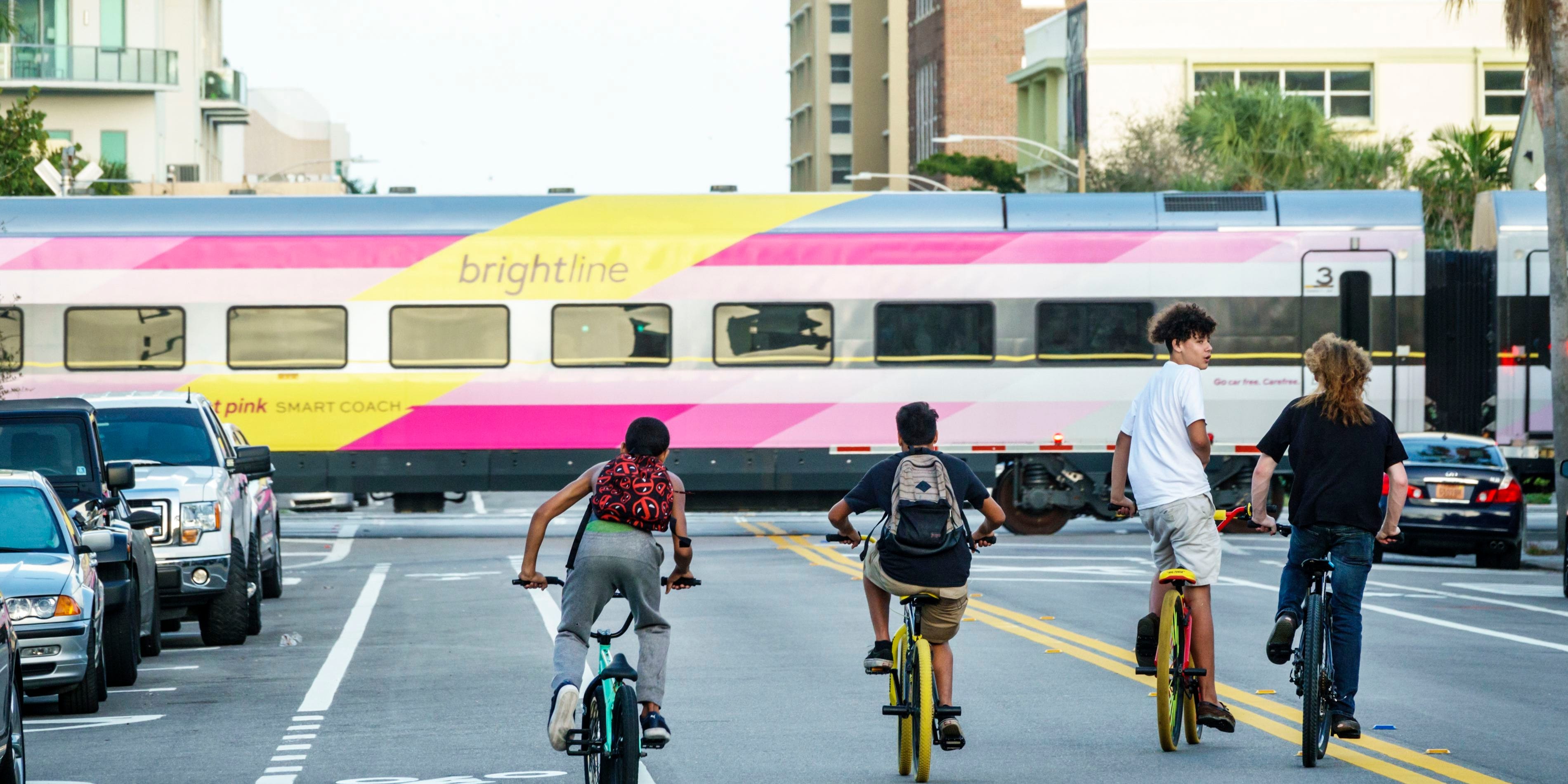 This transport network is luring both businesses and people to the county.

Singer said there had been "tremendous interest" from executives with businesses overseas, who wanted to open offices or even locate to Boca Raton because of its transport links. Meanwhile, West Palm Beach says it has "one of Florida's most walkable central business districts," reducing the need to commute.

People were already migrating – but the pandemic sped this up

Not only have businesses been moving to the county but people have flocked there, too.

Palm Beach County's population grew by around 14.2% over the past decade, according to estimates from the US Census Bureau. This is almost double the rate of overall US population growth. Its population sits at around 1.5 million, making it Florida's third-largest county by population and second-largest by size.

This growth isn't just because of the natural population increases that you would expect over time. There has also been soaring rates of both domestic and international migration. The county's net migration was around 11,500 in 2020, according to US Census Bureau estimates – compared to a net migration loss of 23,625 for New York County, which has a similar population. 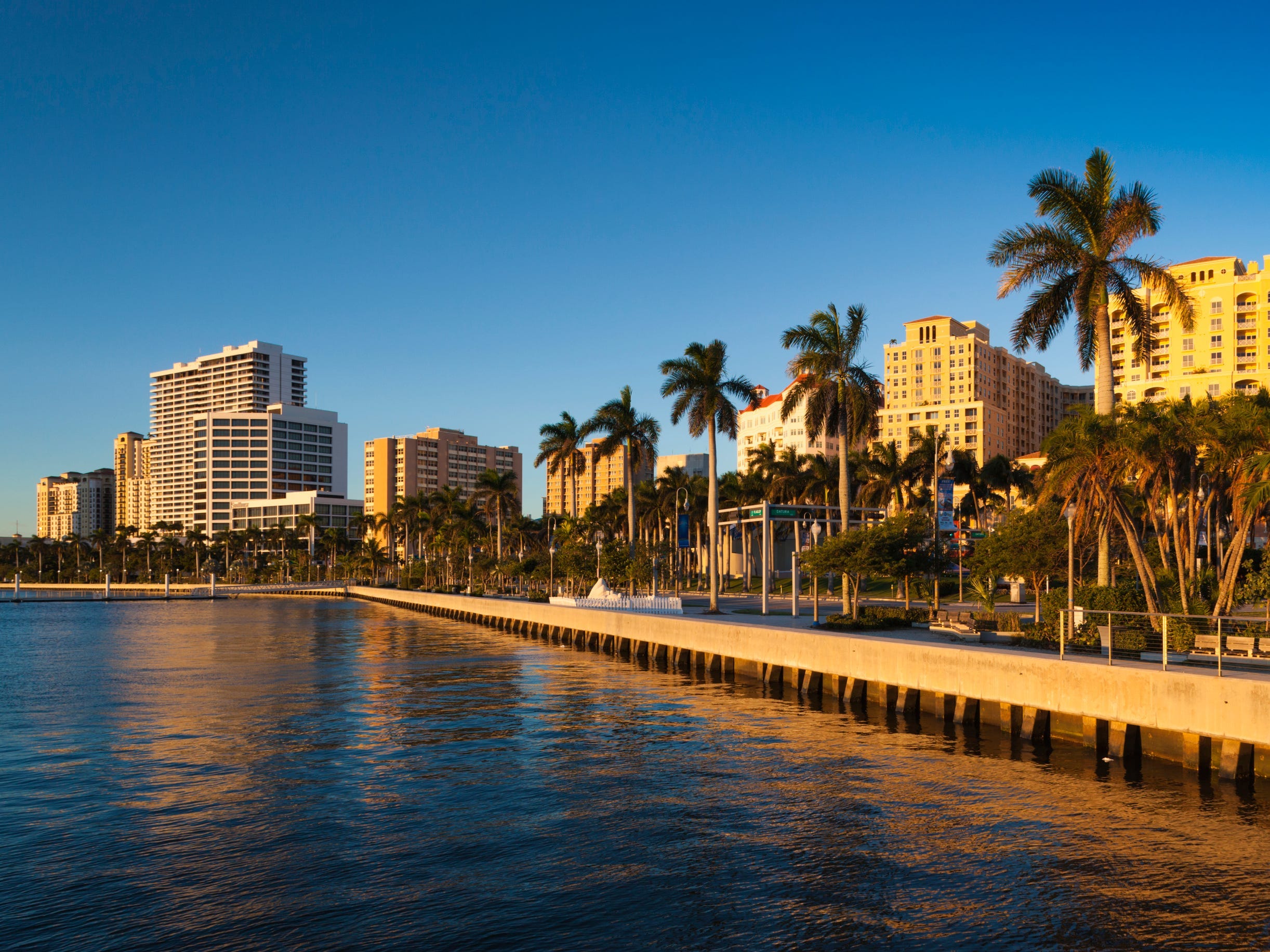 West Palm Beach is a hotspot for for businesses and workers.

Florida is traditionally associated with retirees but McLellan said this trend seems to be fading as more and more families and young high-flyers move to the area.

Many of these migrants are coming from the Northeast. Around two in five people moving to Palm Beach County come from the New York City area, per a report by Unacast. But some also come from cities like Boston, Chicago, and San Francisco, or even from countries like India and Brazil, Boyd said.

Forbes identifies Palm Beach County as Florida's billionaire hub. The 2,600-square-mile county has around 44 billionaires, Smallridge said. This is roughly as many as there are in the entirety of Los Angeles, according to Wealth-X's 2020 Billionaire Census, and includes Interactive Brokers founder Thomas Peterffy, hedge-fund manager David Tepper, and food-and-drink entrepreneur Jude Reyes, per Forbes.

It's also the home of Mar-a-Lago, the US's second-largest mansion, owned by former President Donald Trump. 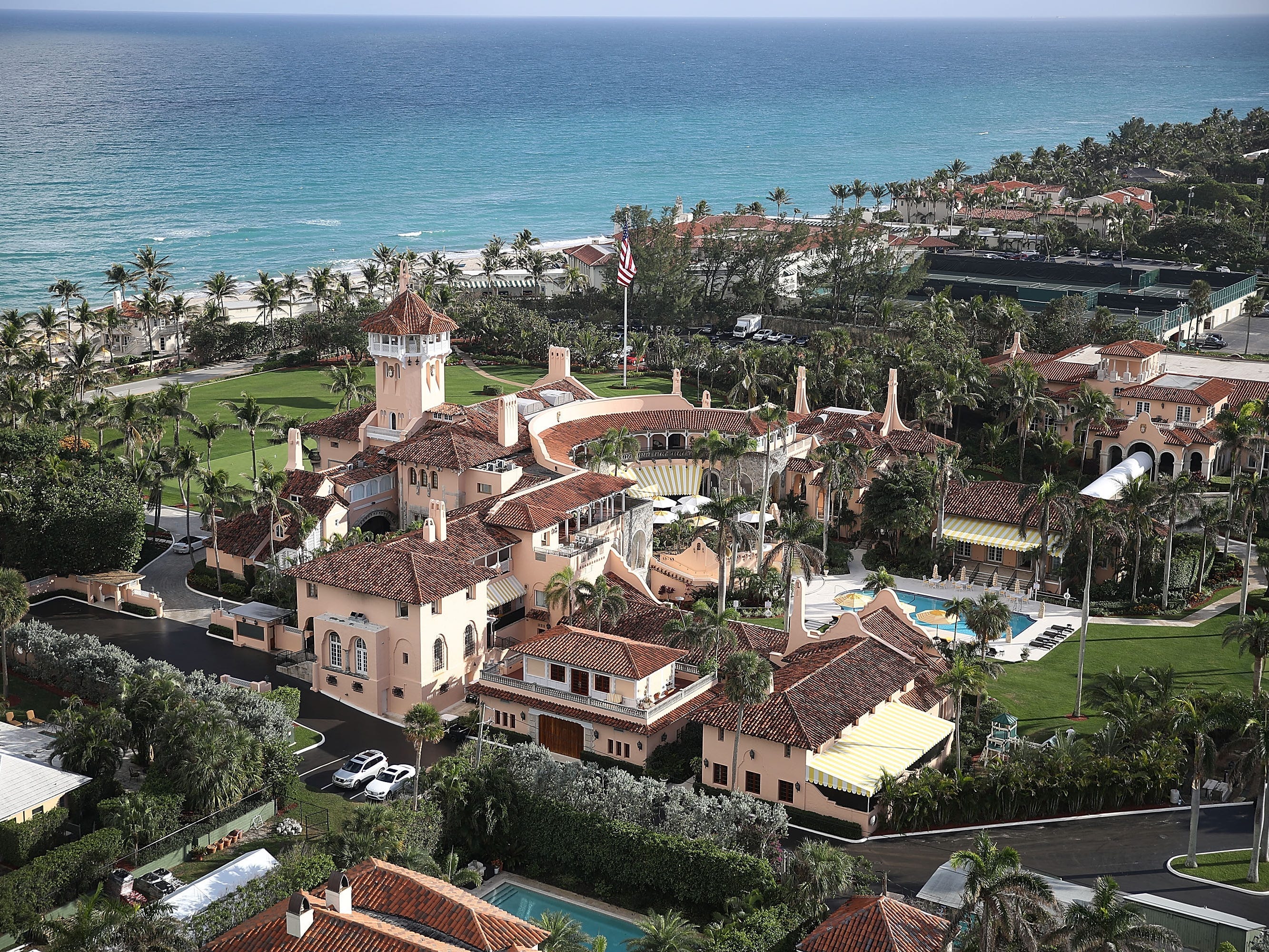 Former President Trump's Mar-a-Lago resort is located in the county.

The county also has around 71,000 millionaire households, Smallridge said. Oracle Founder Larry Ellison recently bought an $80 million house in the county, though he plans to stay living in Hawaii full-time, and fashion designer Tommy Hilfiger sold his house in Greenwich, Connecticut to move to Palm Beach.

Danielle Moore, the mayor of the town of Palm Beach, said it had a reputation as "the hometown of 'captains of industry,'" which she said motivated even more people to move there.

People had already been migrating to the county before the pandemic but COVID-19 forced people to address their work-life balance, alongside the deterioration of office culture, the mayors said.

Alongside companies opening up offices in the city, the rise in remote working during the pandemic has led to digital nomads flocking to the county.

Moore said the town of Palm Beach was experiencing the lowest inventory of available homes "in decades," and house prices across the county have gone up around 10% over the past year as more and more people relocate. 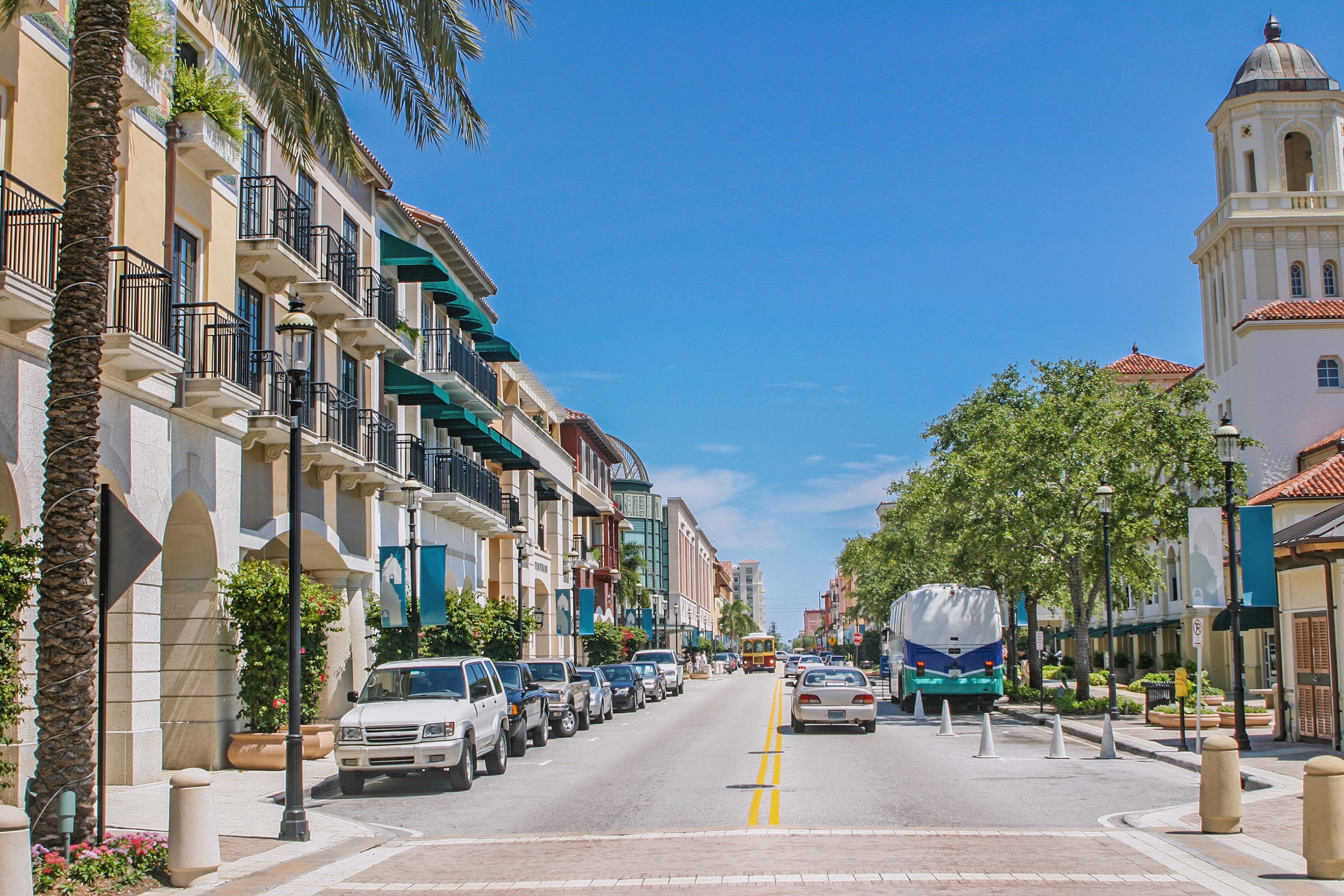 Housing in the area is in high demand.

Some of these people are incredibly wealthy. Sales of million-dollar single-family homes in Palm Beach County increased by more than 140% year over year, according to the 2021 Luxury Outlook report by Sotheby's International Realty.

Florida has remained largely open during the pandemic compared to other states. This led to people choosing to make Florida their primary residence for the pandemic.

"People can work from anywhere, so why not work from paradise?" Singer said.

"That trend is likely to continue because the office environment of New York City is not what it was," he said. He added that New York State was also hiking its taxes.

"When they were closed down, we had plenty of recreation space and great weather year-round, and people are understanding more and more that this is where they want to be," he added.

Alongside retirees, Florida is also associated with seasonal residents who move to the state for the colder winter months, and Moore said that the town of Palm Beach's population more than doubles during the peak season.

But when people relocated to Florida, many started enrolling their children at nearby schools, and soon found themselves settled down in the state, Smallridge said.

Palm Beach County's median age is 43.6, "and that number is probably going to stay steady even as we all age because younger people are being born and coming here every day," Singer said.

The climate has attracted people, too. The county has an average temperature of 75 degrees Fahrenheit, compared to 53 degrees Fahrenheit for New York State, hasn't had snow since 1978, and has around 47 miles of coastline. 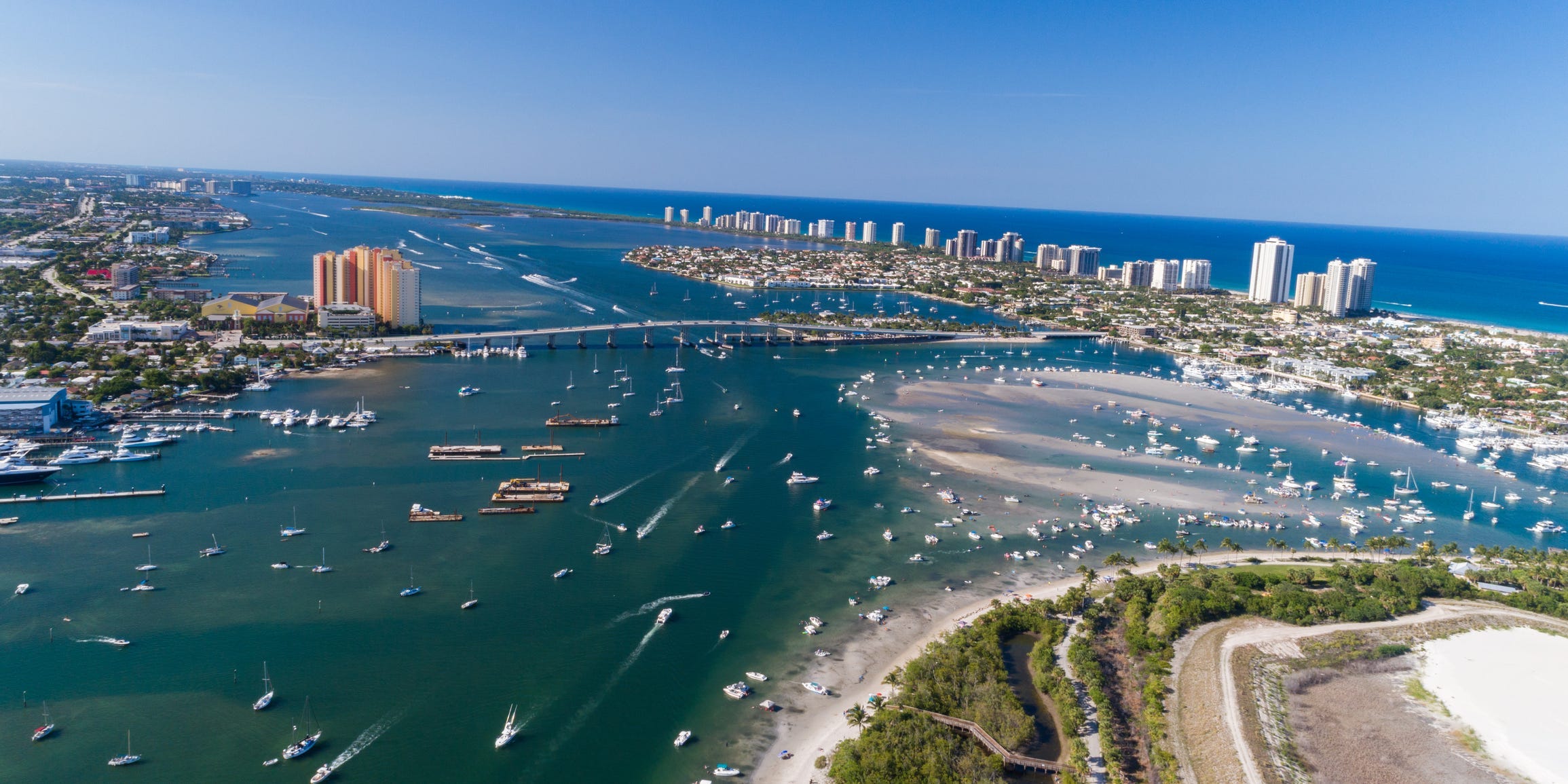 Smallridge said that some of the county's c-suite workers go for a swim before work.

"Most executives will go take a swim in the beach before they even go to work," Smallridge said. "They never have to shovel snow and they don't have to ride with the subway."

But even as more people migrate to the county, some to work remotely while others to work for the companies opening new offices in the area, this trend is ultimately creating more employment opportunities for local residents, James said. He added that West Palm Beach has offered financial incentives to companies moving to the city based on the number of jobs they create, including expedited permit reviews and tax exemptions.

McLellan, meanwhile, said Boca Raton was trying to create a pipeline of future talent for businesses in the area, and that the Chamber was working to discourage residents from migrating away from the city.

Ultimately Palm Beach County is positioning itself as not just a major financial-services hub, but also a destination for families, young graduates, and high-flying execs to move to.