Billionaire investor Chamath Palihapitiya predicted Tesla stock will triple and Bitcoin will soar 5-fold in a recent interview. Here are the 15 best quotes. 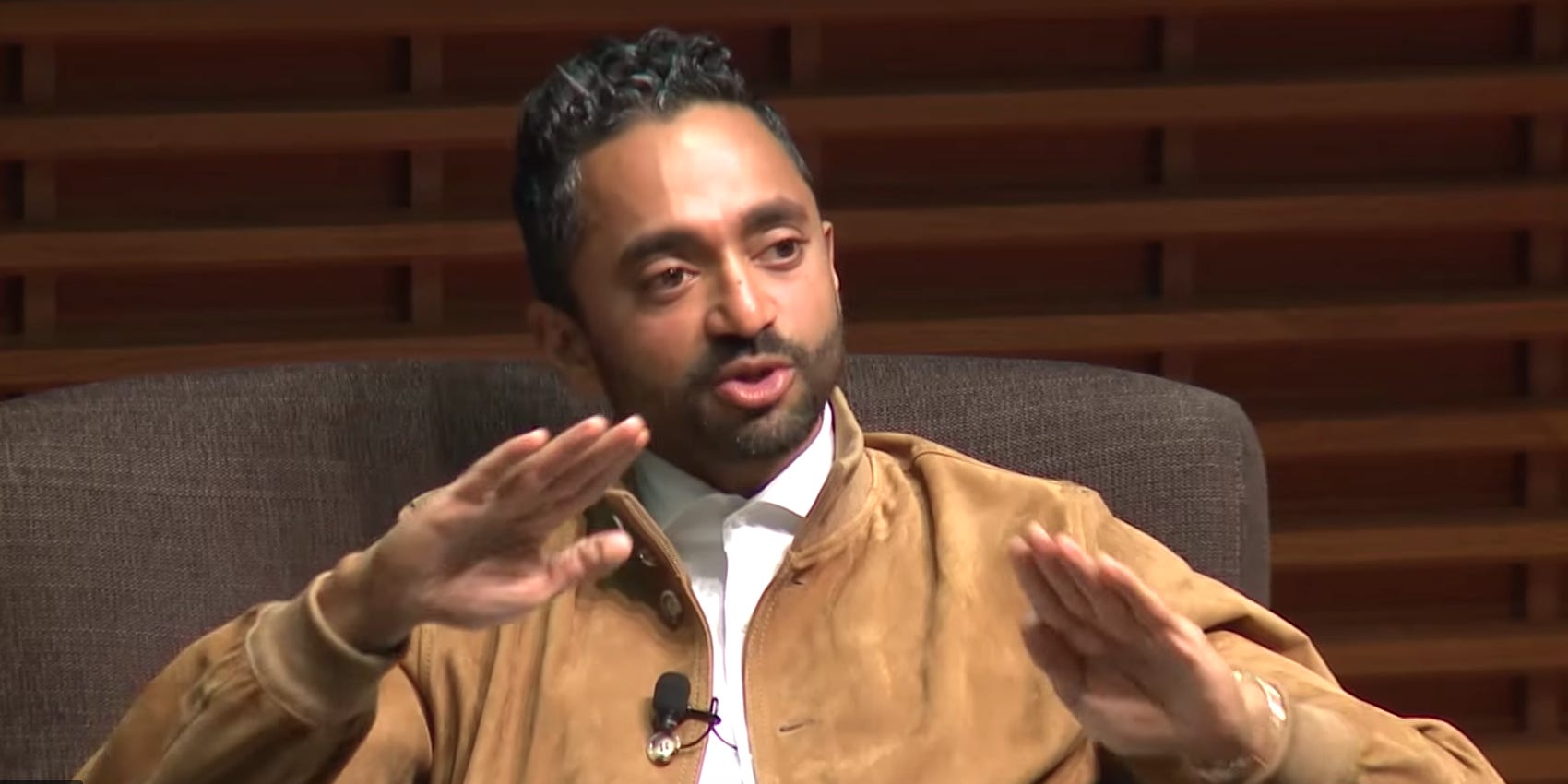 Billionaire investor Chamath Palihapitiya predicted Tesla stock will double or triple and Bitcoin will soar five-fold during an interview on CNBC’s “Halftime Report” this week.

Here are Palihapitiya’s 15 best quotes from the interview, lightly edited and condensed for clarity:

1. “The world’s richest person should be somebody that’s fixing and figuring out climate change.” – defending Tesla CEO Elon Musk surpassing Amazon CEO Jeff Bezos in net worth this week.

2. “The big disruption that’s coming is to power utilities. There are trillions of dollars of bonds, of capital expenditure, of value sitting inside the energy-generation infrastructure of the world that is gonna go upside down. When that goes pear-shaped, Tesla will double and triple again.” – arguing that Tesla is a clean-energy company that will eventually capture a chunk of the fossil-fuel industry’s value.

Read more: A growth-fund manager who’s beaten 96% of his peers over the past 5 years shares 6 stocks he sees ‘dominating their space’ for the next 5 to 10 years – including 2 he thinks could grow 100%

3. “I don’t understand why people are so focused on selling things that work. You’re paid to stay with people who know what they’re doing, and this is a guy who has consistently been one of the most important entrepreneurs in the world, so why bet against him? It’s the same thing with Bezos, why bet against him? You get behind these people who have incredibly strong character, who know what they’re doing, who aren’t gonna bend to short-term profits, and who are just gonna drive the train for 10 or 20 years and make the world a better place.” – explaining why he doesn’t plan to sell any Tesla shares.

4. “These guys are dancing, they are in rhythm, they’re in flow. Let them do their thing, get behind them. Don’t sell a share, just let ’em create value.”

5. “It is rocket fuel for assets. Whether those are housing markets, or whether those are capital purchases like cars or vacations, or stocks in this case if we’re still under a lockdown, these things are just gonna go to the moon for a while and so you just have to be long. Everybody who’s trying to understand why you shouldn’t be long, I think is going to regret it for at least the next 18 to 24 months.” – arguing that shrinking consumer credit-card debts, ballooning savings, and a record amount of funds in money markets will drive markets higher.

Read more: BANK OF AMERICA: Buy these 8 US stocks poised to soar in the first quarter of 2021- and avoid these 2 at all costs

6. “Building products, cars, energy systems, batteries, retail infrastructure, robots, transforming financial services to be fair for everybody – that’s not trading derivatives and playing gotcha. That was not real value, those people were just shuffling shells around. This time it is different because people are making tangible things you can touch and feel.” – explaining why the current market boom won’t lead to a repeat of the 2008 financial crisis.

7. “There’s a massive inequality gap in the United States. There’s trillions of dollars sitting inside of 401(k)s, they need to be allocated into things that can be fast-growing so that normal ordinary Americans can generate savings for their future retirement, for their homes, for their ability to pay for college. You’re not gonna do that by owning American Express. Those companies are dormant, legacy businesses, that game is over.”

8. “I don’t think it’s peak SPAC. You have to have a simple on-ramp to the public markets, a SPAC represents that. There are really going to be IPOs, initial public offerings, and now IPMs, initial public mergers, and it’s just gonna be the two ways that things are done.”

Read more: Bank of America says the warning signs that stocks are hurtling into bubble territory are growing – and pinpoints 6 that could signal a bear market is beginning

9. “Look at the amount of money we waste as a country on all kinds of random nonsense. We let politicians run into the Capitol, hang around for 2, 4, 6 years and then just take from the till.”

11. “We really do need to have some kind of insurance we can keep under our pillow that gives us some access to an uncorrelated hedge. It’s going to eventually transition to something much more important but for right now, the fabric of society is frayed and until we figure out how to make it better, it’s time to just have a little schmuck insurance on the side.” – suggesting that events such as the siege on the Capitol have sapped faith in leaders and institutions, fueling demand for Bitcoin.

12. “It amplifies echo chambers on purpose and by design. If you’re somebody who for whatever reason feels disenfranchised, you can find a corner of the internet where you can amplify your worst fears, and unfortunately 90% of that activity now happens inside of Facebook.”

Read more: The CIO of a $500 million crypto asset manager breaks down 5 ways of valuing bitcoin and deciding whether to own it after the digital asset breached $40,000 for the first time

13. “We optimize for short-term profitability at the sake of our democracy. What we left in tatters was any sense that there was any sort of moral or ethical imperative that would govern decision making at that company. And so that saddens me for the people that work there.” – sharing his feelings as an ex-Facebook employee on the social network’s role in spreading the disinformation that led to protesters storming the Capital.

14. “There are people inside of that company who are building these things that are amplifying the lobotomization, the intellectual cornering of people so that they cannot learn what’s truly happening, so that their worst fears and their worst concerns are amplified. We need to do a better job of understanding that that diet is unhealthy. Now that you sell cigarettes that cause cancer, there need to be labels, they need to be put behind the counter, they need to be far away from the children’s reach.” – arguing that Facebook should be legally treated as a publisher and face tougher regulations.

15. “We just have to have a real ‘come to Jesus’ in this country about what’s truly important.”

Read more: $138 billion megafund AQR shares a step-by-step guide for investors who want to reduce their portfolios’ carbon footprints – and explains why this move could propel returns in the long run